Apple Pay is a simple, secure payment experience, allowing shoppers to purchase with many major credit cards (such as Mastercard, Visa, American Express, and Discover) linked to their supported Apple devices. The shopper authorizes the payment with a single touch.

Apple Pay in the BlueSnap API

Merchants domiciled in the following countries can accept Apple Pay.

Shoppers whose issuing banks are located on this list can purchase with Apple Pay.

If you're using our Hosted Payment Page, Apple Pay on the web is available to you out-of-the-box and is enabled by default. Shoppers viewing your website in the Safari browser can purchase with Apple Pay.

Apple Pay is not supported when using an iframe. 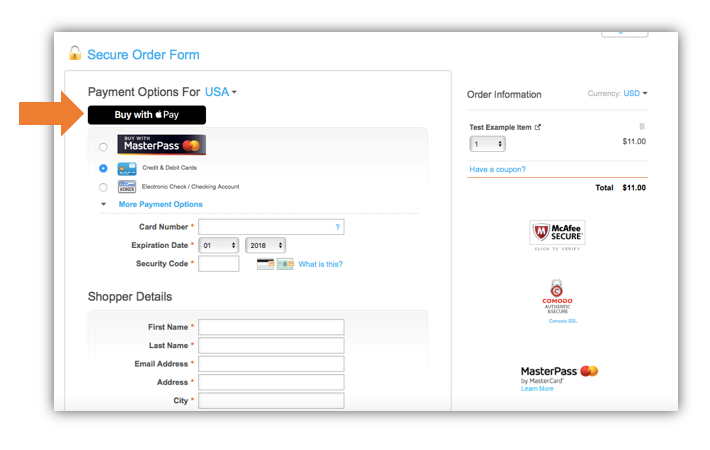 The payment sheet opens on top of the checkout page. The shopper checks their billing, shipping, and contact information for accuracy (or they enter missing information if needed). They also select the card they wish to pay with.

The shopper authorizes the payment by placing their finger on the Touch ID of their iPhone or Mac. Alternatively, the shopper double-clicks the side button of their Apple Watch. 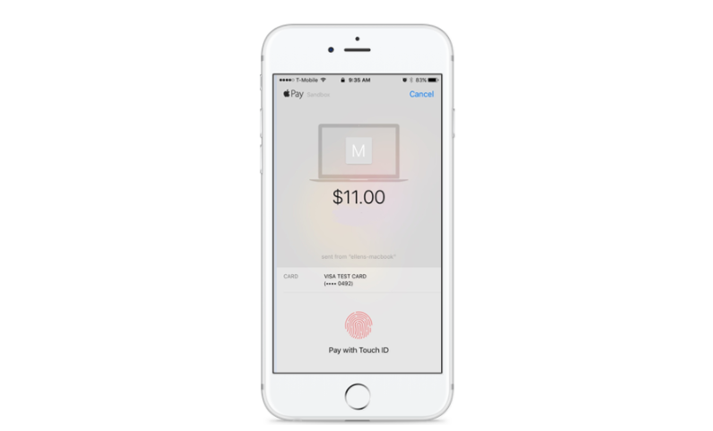 The checkout page updates to display a confirmation page. 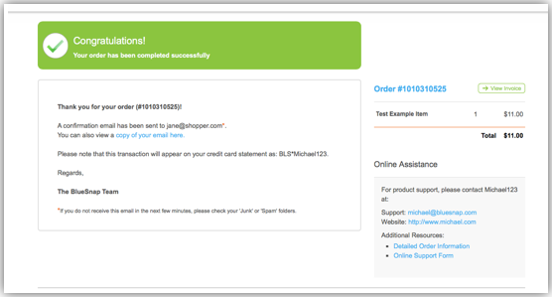 If you're accepting donations, Apple requires that you register with Benevity before you can begin accepting Apple Pay.

You have the option to upload icons that display on the shopper's device during payment authorization. Icons can improve the checkout experience by providing visual reassurance that the payment is going to the right place.

Testing device(s)
Make sure you're testing on a compatible device.

Device region
To provision test cards on your device, you'll need to make sure that your device’s region is set to a country that supports Apple Pay. Currently, Apple supports testing in the countries listed here.

To test Amex cards for Apple Pay, your device region must be set to the United States.

Test cards
The following cards may be used to test Apple Pay transactions.

1 Device region must be set to the United States to test Amex.

Adding a test card to your Apple Pay wallet

Apple Pay in the BlueSnap API

If you're using the BlueSnap API, Apple Pay is available to you to implement in your website or iOS app.

Integrate Apple Pay directly into the checkout on your website. Shoppers on the Safari browser can effortlessly purchase goods and services.

Apple Pay in your iOS app

Implement Apple Pay in your iOS app to let shoppers purchase physical items, such as groceries and clothing, or services, such as gym memberships and hotel reservations.

To learn how to implement Apple Pay, check out the API guide for Apple Pay.